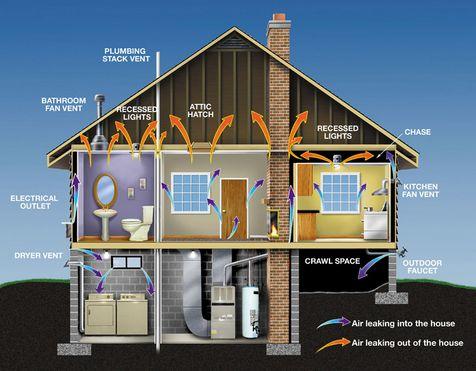 “Convective heat loss” is a physicist’s way of saying that your house is drafty – that warm air has a means of escaping your home.  As a child, when I left the front door open too long, my Mom would say, “Don’t let all the heat out!”  You probably don’t open windows in the wintertime either, for the same reasons (Mom would get upset, right?)  But most houses leak quite a bit of air even with all the doors and windows closed.  We certainly don’t build houses the same way we’d build the bottom of a boat.

With that analogy in mind, here’s an unusual way to visualize why houses are drafty:  Let’s toss your (empty) house into the middle of Lake Ontario (No, this is not a service that True Energy Solutions, Inc. plans to offer).  Where would the water leak in first?  Most attics are vented to the outdoors, so the attic would quickly fill.  Now we’re looking at the walls, floors and ceilings.  In most houses, holes in the ceiling and floor leak more than walls, due to the stack effect, but here in the middle of the lake, that doesn’t really apply.

First, light fixtures, especially recessed can-lights, would be a problem.  Water starts pouring in through all the lights and ceiling fans.  The can lights are each a HUGE waterfall.  Water also follows the path of electrical wires and starts flowing from the attic into interior wall cavities and coming out the electrical outlets and light-switches.  Even walls without wires start to fill up as water seeps into the seam between the 2x4 framing and the drywall.  Poorly sealed bath and kitchen fans leak.  During all this, how is your attic hatch in the closet ceiling performing?

Let’s look at the basement next.  Is it open to the outside?  You probably have holes in your basement where the electric, water, and gas-lines come in.  Central air?  There’s another hole.  Are these holes sealed up air-tight?  Not usually.  With all these holes, the basement starts quickly filling.  Leaky old basement windows pour a steady stream, of course.  The biggest problem in the basement, however, is the seam where the top of the foundation meets the wooden floor above.  That floor above the basement is made of wooden joists that are nailed together.  The outermost joist sitting on the rim of the foundation is (appropriately) called the “rim joist.” It’s usually one of the leakiest parts of a house.  Water pours in the entire perimeter of the basement at the top of the wall.

Flue-pipes run through a wide open channel through the house to the (watery full) attic.  The basement is very quickly filled.

On the first floor of the house, we already have water coming in from the ceiling, as well as from outlets and light-switches on both interior and exterior walls.  Now, leaky ductwork in the basement means that the ducts are filling up.  Even before the ducts are full, water starts coming in at the floor vents AROUND the ducts, through the seams between the duct and the floor.  Old leaky windows are a mess.  Even most newer windows leak quite a bit, not just between the sashes, but AROUND the entire window assembly and behind the trim.  How’s the front door doing?  Do you have a mail slot?  A pet door?

So that scene is partly silly, and partly scary.  Let’s switch back to a real-world scenario.  Warm air rises. There are lots of pathways for warm air to leak up and out of your home into the attic.  This pulls cold winter air into your basement.  Houses breathe out through the top, and in through the bottom.  Downstairs windows leak cold air IN, and upstairs windows leak warm air OUT.  Your home may be replacing ALL of its “paid-for” warm air EVERY HOUR with cold outside air.  Even if it’s every two hours, is that okay?  No wonder your furnace has to work so hard.  No wonder the heating bills are so high. 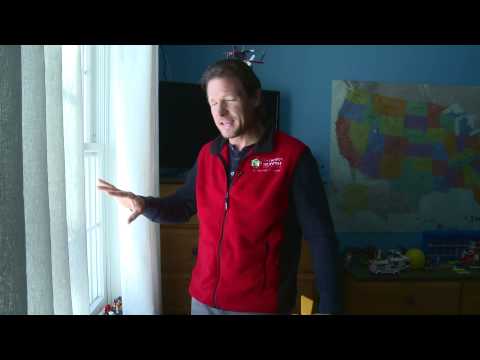 The Stack Effect
If you've been watching videos or reading articles about home energy efficiency, you most likely heard or saw... Watch Video
Back to Previous Page
Back to News & Events

We serve the following areas